When Emanuel Rentschler purchased his 216 acre farm back at the turn of the century, it would've been impossible for him to imagine the transition his homestead and farm would take this past week. More striking than the transition from horse to tractor or lantern to light bulb, is the ultimate transformation from a quiet museum of quaint and rustic artifacts to a busy and bustling set of a motion picture, straight out of Hollywood.

After many phone calls and planning on the part of Northland Production and Film Company and the Saline Area Historical Society, the first of the set productions to take place began on Friday, November 13, 2009. Carpenters, painters and the first set dressers began turning Rentschler Farm Museum of Saline into a fun and festive farm destination in Cedar Rapids.

Thus, the name of the film Cedar Rapids, a comedic film produced by Alexander Payne (Sideways) and directed by Miguel Arteta (Youth In Revolt). The film stars Ed Helms (The Office, The Daly Show, The Hangover), John C. Reilly (Chicago, The Perfect Storm, many others) and Anne Heche (Hung, Men In Trees). Originally planned to film in Cedar Rapids, Iowa, the production sought out a new location when the state of Iowa suspended their tax incentive program for filmmakers. Michigan, called by some "The Hollywood of the Midwest", continues to attract film after film because of similar incentives. This is both beneficial to the production companies, as well as Michigan workers, who are called to duty when set crews are needed. By day two at Rentschler Farm Museum, more craftsmen were on site, to be followed on day three, by hundreds.

Builders constructed fencing and reinforced structures using recycled wood from the farm. Giant generators were set up and ran constantly. Yellow electrical cords were strewn from one end of the farm to the other powering up saws, drills and nail guns. 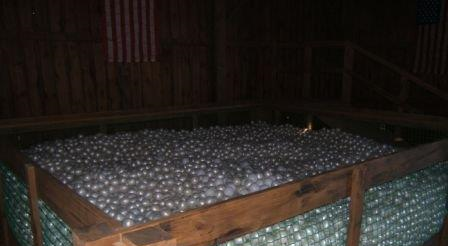 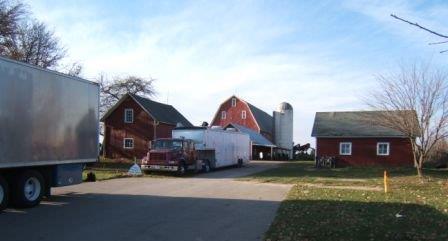 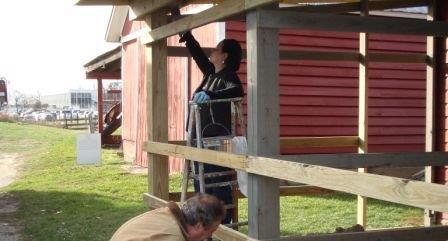 Jane Thompson, Jim Reubbo of Garden City and John Schultz of Chicago painted the chicken run. It had been recently constructed and "we are painting it so it doesn't look so new," Thompson said. All craft positions were filled as locally as possible by area workers.

Jay Potter, a carpenter out of Wyandotte built a massive ball pit inside the upper level of the main barn and appreciates the work. "Its good work for me, and really good for the Michigan economy" Potter says. The ball pit consisted of a wood frame and green mesh sides, about 15" x 15" and four feet high. The pit was filled to the rim with cases and cases of white, pearlescent, plastic balls. There were other colored balls hidden within the pit, and these items set the scene for the actors.

A white truck backed up to the exhibit barn. Period furniture, tables, chairs and signage were unloaded to turn the barn into a meeting hall, of sorts, where a Czechoslovakian Egg Painting Contest, an activity in the film, would take place. With the exception of some d'cor and additional furniture, the interior and main structures of all of the buildings used for filming were left untouched. After all, the charm and authenticity of Rentschler Farm Museum is what attracted the production team from the beginning.

The change from just one morning to the next was explosive. Rentschler's giant red barn and outbuildings became subtle back drops to semi-trucks and trailers, catering operations, security detail, police cars, shuttle vans and literally tons of equipment. The grounds were in constant motion with carts being trekked across the dirt hauling any number of things. There were giant spot lights, electronic monitoring equipment, reflective panes, cables and hoses, aluminum framing, piles of canvas tenting, propane and heaters, tool boxes, ladders, tarps, cameras and computerized gadgetry, coffee and fruit cups. Small armies of people worked on independent missions, yet they all seemed to operate rhythmically around each other. David Rhoads, the man in charge of the farm for the filming and President of the Saline Area Historical Society looked at the flurry of activity, smiled a bit and commented, "It's like an ant colony with all these people around."

On filming day, the ball pit scene would be the first to shoot. The upper level of the cow barn was filled with the producers, the production assistants, camera crew, sound crew, lighting crew, actors, extras and observers, with many more overflowing out of the barn door. They were grips and coordinators, actor assistants and assistants to assistants. Directly outside the barn door was a tent set up for the stars of the film. Director's chairs with their names on masking tape stuck to the backs of the canvas chairs, "Annie", "Ed", "John" and more. It was very cold and windy so each chair had its own blanket and a giant heat lamp. There were hot and cold refreshments for the actors, and hair and make-up staff were close by. Costumes had been brought in by truck and wheeled up on a portable closet covered in plastic. From inside the barn, the director would yell "Rolling!", the outside crew echoed the sentiment down the length of the farm and all turned quiet. Even the traffic from Michigan Avenue stopped, directed by Saline Police Sgt. Jay Basso. When the shot was filmed to satisfaction, the director shouted "Cut!" and activity throughout the farm, set, and roadway continued. The ball pit scene took about two and a half hours to film. David Rhoads, in addition to oversight of the project, got to experience his own glimpse of fame, as he participated in the filming as a ball pit judge.

Three more scenes were shot throughout the day, with breaks only taken for last minute scene sets, moving cameras, and of course, to eat! A gigantic, white, wedding-like tent, complete with windows and chandelier, was raised just off site with enough food to feed, you guessed it, an army! The breakfast bar had hot and cold cereals, breads, muffins and bagels, eggs, bacon, pancakes and other traditional breakfast fare. Made to order breakfast sandwiches were also available with hot coffee, tea, fruit, and juices. Other meals throughout the day provided a variety of choices from sandwiches to salmon. In addition to the large food tent, a smaller spread was set up on site with fresh fruit and nuts and other munchies, coffees, teas, water and even a pharmacy basket with over the counter remedies for anyone suffering from the cold or the straw in the barns.

As the day progressed and the colonies kept moving, it was funny to see and hear the kinds of things one would expect to hear on a movie set. Set designers really do wear berets and production assistants do sneak up to a producer to hand him a cup of fruit. A walkie- talkie screeches "Is the grilled cheese sandwich in place?" to be answered, "Yes, the grilled cheese sandwich is up there, in place." A busy set design supervisor walks briskly and talks into a cell phone, "It's a corporate account for Cedar Rapids Fox", another yells down the trail, "check with hair and make-up, I think they've got it". Another, "we only have two buckets and there's supposed to be three cows to pretend to milk." 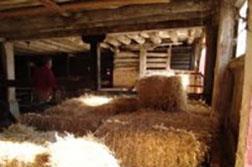 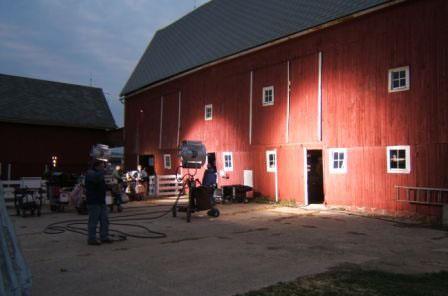 The Museum took on a whole new and exciting look as night falls. From a distance, the bright lights shining onto the giant red barn looked more like an amusement park or State Fair spectacle. Beneath the barn light, the crews continued to move making the needed adjustments for the shot. It was quieter then, as only the last actor for this scene was left, the other stars shuttled back to the hotel, out of the cold. When the filming wrapped up, an immediate dismantling began. The same army who moved in with their piles of boxes and equipment, carts and cords, disassemble and reload trailers even more quickly than when they arrived. In minutes, spotlights were dimmed, monitors were turned off and tents came down. The interior of the trailers were illuminated with fluorescent lights and really gave image to the amount of equipment that can be loaded up and transported from location to location. Not an inch of space was wasted with shelves full and coils hung, carts parked and food refrigerated. The men and women of this production company moved like a machine. The same constant flow as before, perfectly choreographed without a collision or a part left behind.

As quickly as they came and transformed, they left. Northland Production and Film Company, like a whirlwind, blew in and blew out of Rentschler Farm. If one hadn't seen it happen, it'd be hard to believe such a flurry of activity, technology and even a little bit of Hollywood glamour, hustled and buzzed and took over the Museum. Today, there is no trace they were there at all. Like many other great stories woven into the agricultural and family histories in Saline, the filming of Cedar Rapids on the old Rentschler Farm will be yet another thread to tell future generations, maybe even someday when motion pictures are considered quaint and rustic.
April Scarlett 2009 Photographs by David Rhoads and April Scarlett