THE DAVENPORT-CURTISS HOUSE and the Influence of William H. Davenport in Saline
Webmaster's Note: Robert Lane is on the Board of Directors with the Saline Area Historical Society. His article on the Davenport-Curtiss House on E. Michigan Avenue in Saline, MI, appeared in our local newspaper The Saline Reporter. Although it originally appeared in two segments, the article is reprinted here, in toto. Questions and comments can be addressed to Mr. Lane at salinehistory@yahoo.com 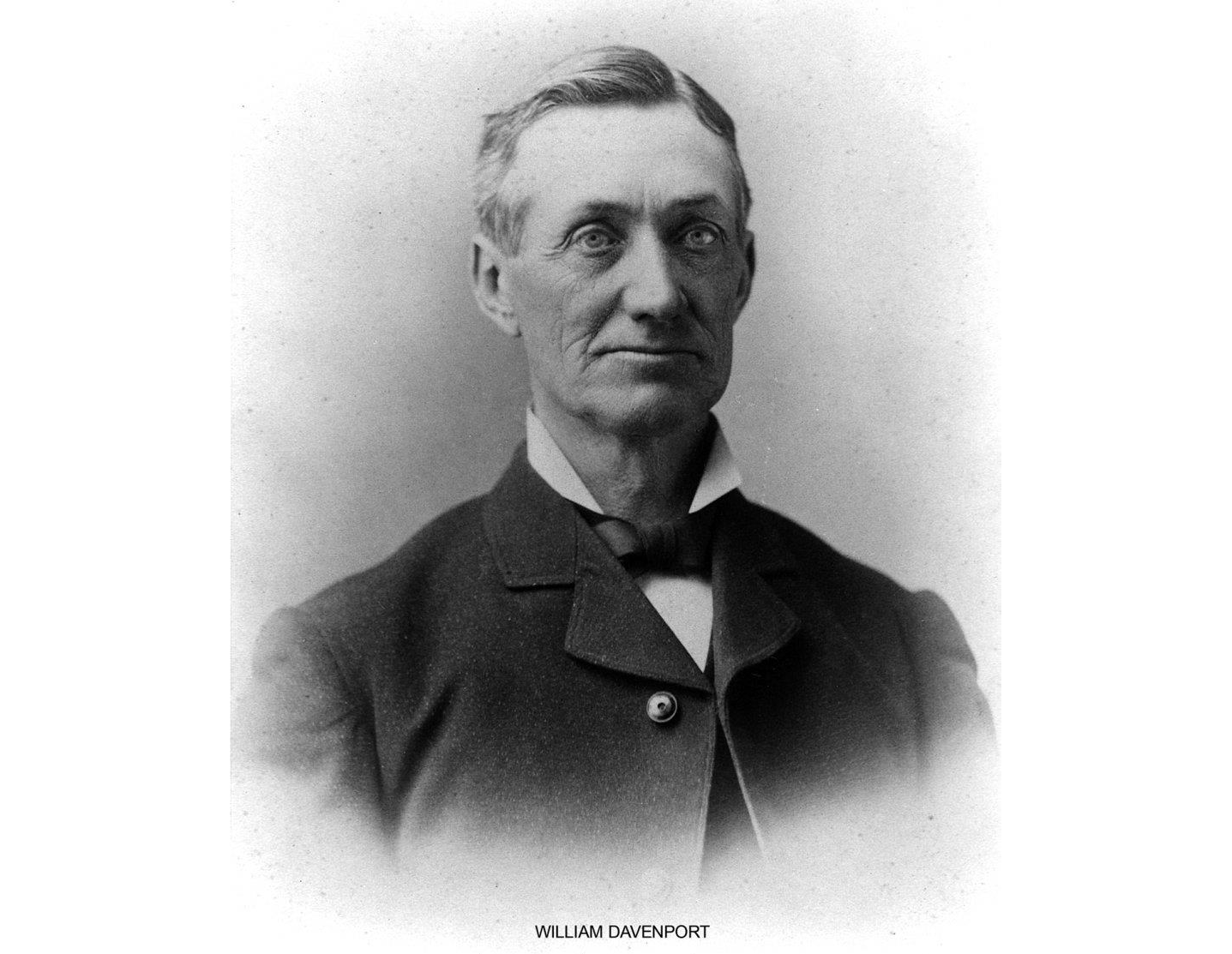 What is the story on that beautiful old home with all the land around it? During the years I worked at Cadillac Plant in Detroit, I was often asked that question when I told my co-workers I lived in Saline. I would try to tell what I knew. Now, there are people new to Saline who may be asking that question. This story is an attempt to provide history on who built and lived in that house.

The house was built by William H. Davenport. William was born October 23, 1826 at Batavia, NY. He immigrated to Saline with his parents Beverley and Gertrude about 1827. William went to Saline's first one-room log cabin schoolhouse. His name shows up as a student in the 1830s.

In the 1840s, he secured a position with Caleb Van Husen as a clerk. He continued as a clerk until 1851 when he commenced business for himself in a store where the Burkhart Building is today (next to the Brecon Grille). Soon after, he formed a partnership with Henry J. Miller and after they separated, he started his own business. For many years he conducted a successful mercantile trade, buying and shipping large quantities of wool and dressed pork. In 1863, he erected a three-story brick building at the northwest corner of Michigan and Ann Arbor St., (now lost) which he occupied as a place of business until he died September 3, 1909.

On November 6, 1851 he was married to Miss Zylpha P. Parsons and their union was most pleasant and happy. They had three children but only one, a son Beverley P., survived at the time of his death.

Instrumental in Getting the Railroad to Saline
After the Civil War, William became a leader in Saline's attempt to get a railroad. This led to his becoming a board member of the Detroit, Hillsdale and Indiana Railroad. The citizens of Saline raised $75,000 to get the railroad into Saline and on July 4, 1870 the first train arrived.

This certainly sounds like a bank. But during the Financial Panic of 1873, he apparently lost control of the bank or it went bankrupt in 1874. To pay off debts, he was also forced to sell his brick house east of Saline on Michigan.

Builds His House
William prospered after the Depression and with prosperity, he decided to build a new house. His son Beverley had built the mansion on East Henry for his new bride in 1874 and William decided to place his home across from Beverley. In 1875, he hired William Scott, an architect from Detroit, and the house was built for about $8500. 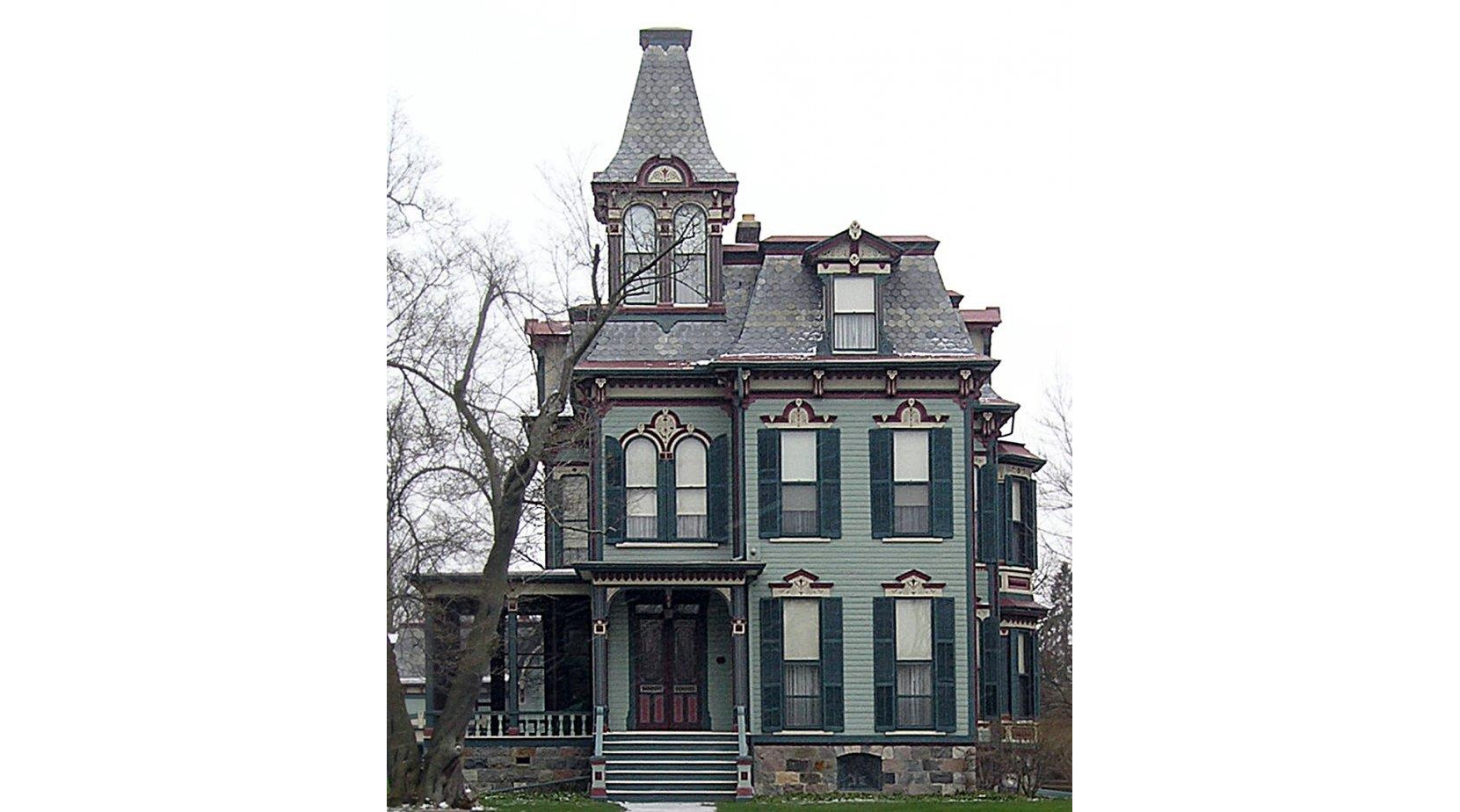 William Davenport hired William Scott, a Detroit architect, to build a "Second Empire" house. This style has strong vertical features with a special roof, mansard, that is two sided, with the lower slope at a steep angle and usually a tower is added. The style developed in France and became popular in the U.S. after the Civil War. One known contractor is Sears Bros. Practical Roofers of Detroit. Likely, they built the roofing on the house.

The interior has large rooms with high ceilings, with most of the windows extending from the floor to the ceiling with hardwood trim. William and his wife went to the 1876 Centennial Celebration in Philadelphia and there, purchased much of the furniture for their new house. The house remained unchanged over the years until the Curtiss Family became owners.

The Davenports were leaders in Saline business and social life.

Telephone
In March of 1881, the Davenports had their residence connected by telephone to their downtown store. They were the first in Saline to do this. It was reported that the new telephone worked to perfection. The Saline Observer stated: "Not only can a conversation be carried on with perfect ease, but also while in the store, Editor George Nissly could distinctly hear the music of the piano Mrs. D. was playing." Mr. Davenport became the agent for the Holcomb "one of the best cheap telephones made."
Another Bank
In 1885, the Davenports formed their second bank, Citizens Bank, that survives today as the KeyBank at the original corner, Michigan Avenue and N. Ann Arbor Street. It was said that William had a safe and was storing money for townspeople and so was asked to form a bank. In 1894, he remodeled the building downtown to make it more of a bank. He added a vault, 8 X 20 feet, with a 24-inch wall. 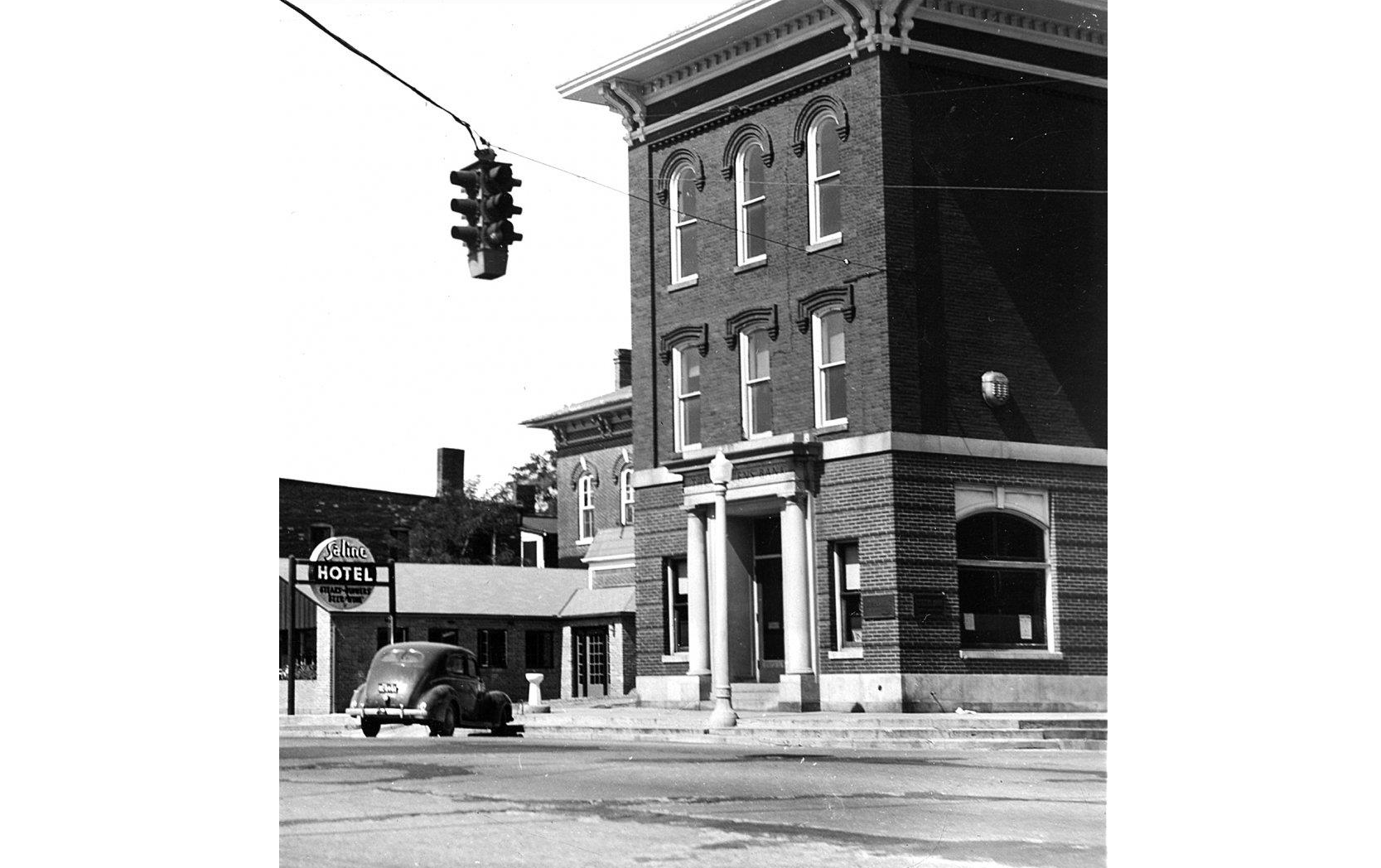 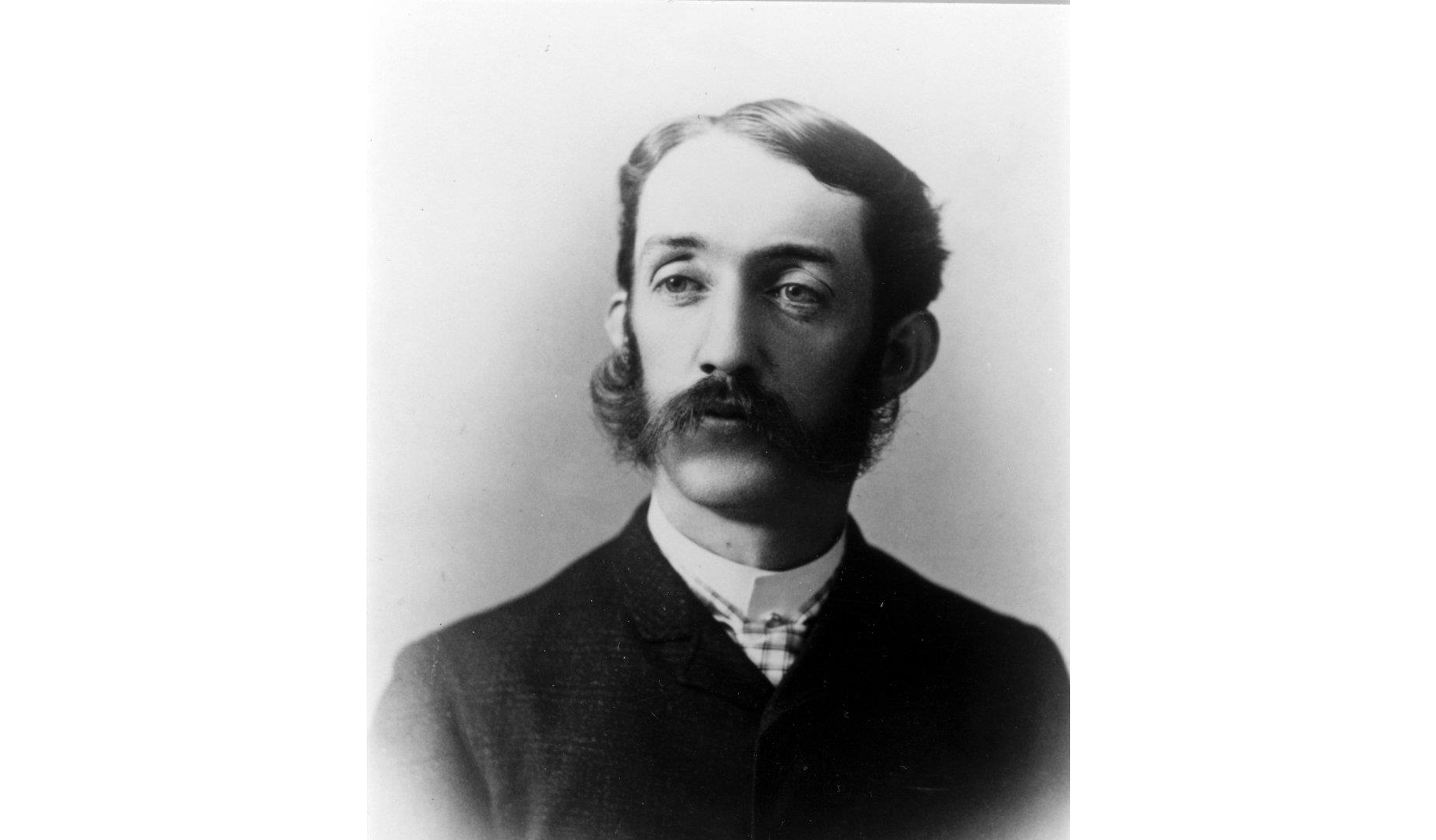 Beverly Davenport
Fire Department
In May 1881, Saline was hit by a disastrous fire that destroyed a major part of the town. It was decided to purchase a fire engine and bell. William and Beverly said they would take on this project. A fire company was formed with Beverley Davenport as Chief. A 400-pound bell was purchased and placed at the Davenport building. In November 1881, a fire engine arrived with great celebration at the train depot. On each side, in gilt letters was the name "Davenport".
A demonstration was set. At about 4 p.m., a few taps of the fire bell announced that things were ready and in a short time, a large crowd had gathered at the school grounds, where the squirting was to be done. The engine and hose cart, with their bright new paint and polished brass, presented a very neat appearance as the jolly crowd drew them through up N. Adrian St., now N. Ann Arbor St. At the school grounds, the engine was placed in position and the fun began.

It had two nozzles - the three-quarter-inch threw a stream considerable higher than the cupolas on the school building and with a one-inch stream, the roof was easily deluged. It was evident that there is much to learn about handling the hose in order to make it work successfully. Considerable merriment was caused by the nozzle getting out of control. The hose men, throwing the stream into the crowd, scattered everyone at a lively rate.

Library
The Saline Library was organized November 30, 1900 and led by Mrs. Zylpha Davenport. She donated money to build the first library building, as well as many books.

William Davenport died Sept 3, 1909 and a shadow of gloom and sorrow was spread over Saline Village. His son Beverley passed away April 16, 1930. They were the last of the Davenports in Saline and their house passed on to Carl Curtiss, who worked in the Citizens Bank.

For many of the institutions we value today in Saline, we can thank the Davenports. Their memories remain in two lovely homes on the east side of Saline.