THE ICEHOUSE
By Susan Kosky

Most of us take for granted the convenience of going to the freezer section of our refrigerator to get ice cubes for a cold drink. And some may remember the days before electrified refrigeration became mainstream when the icebox was the common method of keeping food cold. In the nineteenth century and first part of the twentieth century blocks of ice were either delivered to one’s home (by horse and cart) or ice was available for purchase at a local business. Besides the icebox, some homes, particularly in rural areas, had icehouses.

Ice harvesting goes back to 1780 BC in Mesopotamia. Ice pits, used to store food and ice, were found later in Greece, China and other Asian countries. In some countries ice was harvested in the mountains and brought to the valley for use by those who could afford it.

In the United States during the 1800s, axes and saws were used to harvest ice from rivers, lakes and ponds. Nathaniel J. Wyeth invented a horse drawn ice cutter in 1827, enabling ice to be cut in rectangular blocks. Wyeth, who lived near Boston, also invented ice cutting tools and ice tongs for lifting blocks of ice.

Harvesting ice from the Saline River had its pros and cons. One of the pros was the use of the ice by the Alber Bakery to make ice cream. One of the cons was that the Lindenschmidt Slaughterhouse was located near the river. 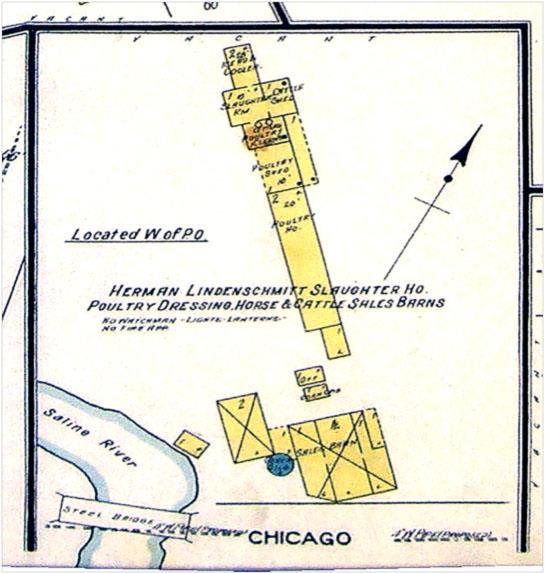 Sanborn Fire Map from the late 1800s -early 1900s showing how close the slaughterhouse was to the Saline River (courtesy of Bob Lane)
Frederic Tudor, also from the Boston area, began a successful business of cutting and transporting ice to other states and even to other countries. This led to future discoveries and inventions including the fact that storing ice in a well built above- ground icehouse worked better than storing ice underground as it allowed melt water to drain away. In Ice, the Amazing History of the Ice Business, Laurence Pringle describes a well-built icehouse: “…the floor was off the ground, not resting on it. Since dark colors absorb solar energy, the walls and sometimes the roofs of icehouses were painted white to reflect the sunlight. Finally, a well-built icehouse was windowless, had its entrance door facing north, and had vents in its roof to allow any heat to escape”. (Pringle, p. 9) 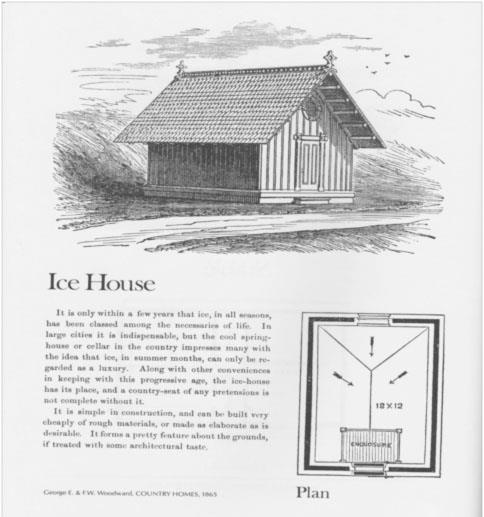 (Image from Country Homes by George E. & F. W. Woodward, 1865)
Lewis Allen in his1852 book, RuralArchitecture, describes building an icehouse. Like Tudor, Allen advocated an above ground structure, but recommends an inner partition that could be filled with moist tan bark or sawdust for insulation. In addition, he suggested laying down loose planks or boards for a floor, and then covering the floor with a foot of straw. Allen estimated the cost of building the icehouse in 1852 as between $50 and $100.

In regards to the benefits of the icehouse Allen states, “Those who love well-kept meats, fruits, butter, milk, and various etceteras for the table, understand its utility well; to say nothing of the cooling draughts in the way of drinks, in hot weather…” (Allen, p.260)

By the early 1900s the icebox and icehouse began to disappear. In part, it was felt that the ice was not always safe for consumption. The other factor was the invention of the electric powered refrigerator developed by French physicist Marcel Audiffren. By 1937 U.S. customers had purchased 3 million electric refrigerators. (Pringle, 54) 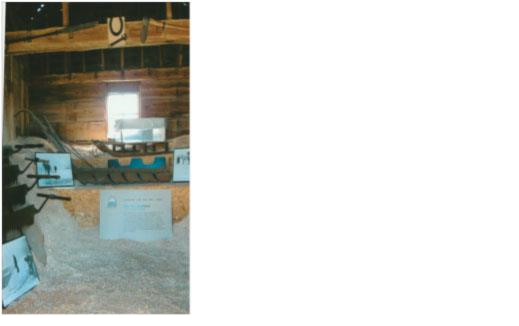 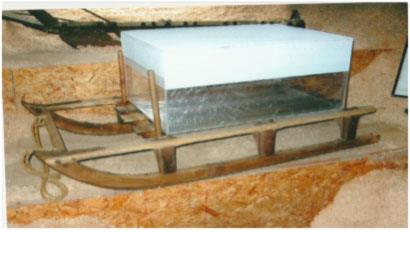 While Rentschler farm did not have an icehouse, a corncrib has been refurbished by Gus Christensen as an Eagle Scout project, and now looks just like an icehouse. SAHS board member Bob Wittersheim has expertly interpreted the interior of the icehouse using antique saws, ice cutting tools and an antique icebox. During a visit to the Knowlton Ice Museum in Port Huron, he found an example of how the swing guide was attached to the ice plow, and has completed a version of the ice plow. Bob said, “Our sled is in fact a general use farm sled with ice harvesting being one of the many uses”. The icehouse will be used an educational tool for visitors and is complete with a plastic block of ice!

Webmaster’s Note: Susan Kosky is a graduate of Historic Preservation and author of Images of America: Saline and co-author of Michigan’s US 12 Heritage Trail. She is a member of the Board of Directors of Saline Area Historical Society.