When St. Joseph Mercy in Saline transitioned to a 12-hour urgent care site on April 15, it marked the first time since 1928 that the community will be without a full-time hospital.

Officials announced in December that the longtime community hospital would eliminate its 24-hour emergency room service and roughly 60 positions - 40 part time and full time, and about 20 contingency staff.

In a previous interview with The Saline Reporter, president and CEO of St. Joseph Mercy Hospital for Ann Arbor and Livingston, Rob Casalou, said while the decision was "painful" it is the right thing to do in order to adjust to current health-care patterns.

Casalou said previously he did not have precise numbers on how much money the conversion will save the SJMHS. However, the Saline site has been substantially "in the red" for the past year or two.

"I firmly believe it's the right thing to do, it's just painful," Casalou previously told The Saline Reporter.

The Saline "community hospital" has taken a number of different forms in different locations starting with the first hospital site at 106 W. Henry St., established in 1928.

The building at 201 S. Ann Arbor St. served as the third site of the Saline General Hospital which served the community from 1933 to 1969. 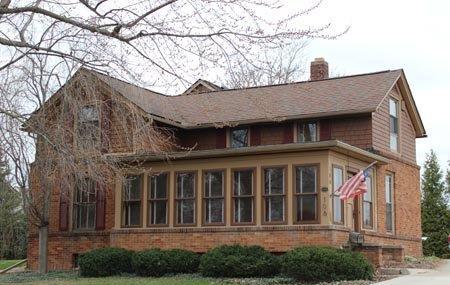 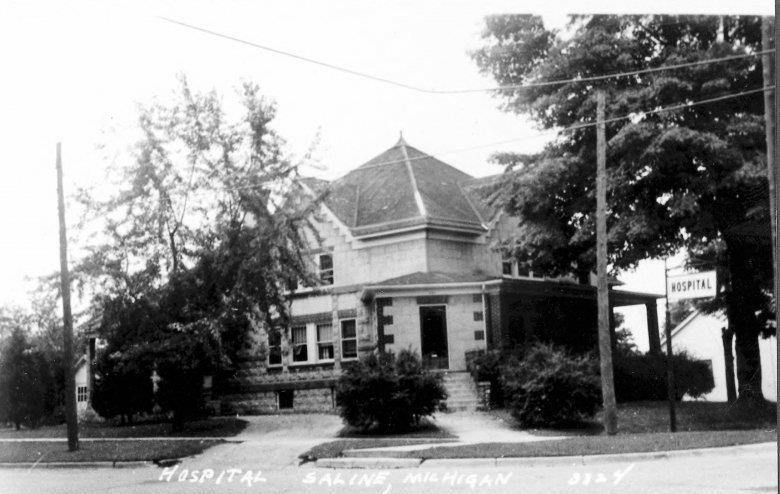 400 W. Russell St.
That hospital was managed by Cora Dickson until 1932 according to a survey conducted by Kosky & Glynn Associates in 1994, as gleaned from to the city of Saline website.
Another smaller hospital was established at 203 W. Henry after Dickson had discontinued services at the original location. This site was ran by Nurse Hilda Wacker (formerly Hilda McHenry) with the assistance of her husband, Ralph, from 1933 to 1935.

However, according to another Saline Observer article from the March 9, 1933, McHenry's hospital was opened at 205 W. Henry Street - not 203.

"Mrs. Ralph McHenry...has announced opening of The Saline General Hospital, 205 West Henry Street, adequately equipped for all types of major and minor surgery, medical and maternity cases. Mrs. McHenry is a graduate nurse, having graduated from St. Joseph's Mercy hospital, Ann Arbor, and announces that the hospital will be open to residents of Saline and vicinity and their family doctors," according to the article which can be found on the Central Michigan University Online Digital Object Repository or CONDOR.

According to a Saline Observer article from the Oct. 14, 1954 edition, Dr. Gordon Prout agreed to be paid $10 in cash for a delivery at this hospital. The first baby born at this location was James Levleit.

The site of the first hospital in Saline at 106 W. Henry is now a residential home, but carries a rich history.

The building at 201 S. Ann Arbor St. served as the third site of the Saline General Hospital which served the community from 1933 to 1969.

Around the same time McHenry had opened her hospital on West Henry, John Schleh had purchased and remodeled the building at 201 S. Ann Arbor St. and leased it to the McHenry's to open a second, larger hospital.
Originally constructed in 1904 and occupied by a local engineering firm since 1994, the building at 201 S. Ann Arbor St. has served many community functions such as the library, the Saline Baptist Church, a funeral parlor and a furniture store.
In 1949, when the hospital was under the administration of Charles and Geraldine Uphaus, the building was expanded. Then in 1951, Mr. and Mrs. Basil Badour leased the building from Schleh to house the Saline Convalescent Hospital, according to city archives.

A Saline Observer article from the Jan. 11, 1951 edition described the Annual Meeting of the Saline Community Hospital Association as gleaned from CONDOR archives.

The article states "Charles Uphouse, of the Saline General Hospital," was looking to upgrade the hospital facility with a new, modern structure to be located on the Mills, property overlooking Ford lake. An option on a thirty acre tract of land has been secured there for the site of the new hospital."

In the July 19, 1956 edition, The Saline Observer announced that the Saline Convalescent Hospital "at the corner of E. Henry and S. Ann Arbor Sts.," had been purchased by Mary Miller of Belleville, a registered nurse who graduated from Highland Park Hospital School for Nurses and was a former director of nurses at Garden City Hospital.

The article states "The hospital with a capacity for 13 patients was established a year ago by Mrs. Basil Badour in the building occupied by the Saline General Hospital."
Before Schleh bought the home at 201 S. Ann Arbor, it served as the Saline Baptist Church from 1904 to 1919. It was then sold to Alphonse Schmidt in 1920 after congregation members decided to merge with the Presbyterian Church.

After serving the community as the Saline Convalescent Hospital, the building was home to the Saline Public Library from 1969 to 1993. In 1994, Roy McEnhill of MB Ventures purchased the building from the city of Saline for the current business, Process Results.

This is a historic photo of the original construction of the Saline Community Hospital at 400 W. Russell St. Photo reproduced with permission from the Saline Area Historical Society.

Like the local hospital sites before it, the building at 400 Russell St. - home to the current St. Joseph Mercy Saline hospital and now urgent care - has undergone many changes.

The original construction was made possible due to local fundraising in 1959. The facility expanded in 1974 and again in 1994, after it had merged with St. Joseph Mercy health system in 1991.

According to city website, "...the establishment of the hospital was the result of a caring community whose goal was to create a new modern medical care facility for the residents of Saline and the surrounding communities."

Revenue problems at the hospital began surfacing in the mid-2000s when officials began to see a decline in emergency room patients. However, that number saw a sharp increase in 2010 when the hospital's in-patient unit closed.

When that unit closed, the emergency room could no longer accommodate patients arriving via ambulance because it did not have an on-site hospital, which is required by ambulance companies. As a result, patients who required those services were taken to St. Joseph Mercy of Ann Arbor or the University of Michigan Health System emergency room.

In late 2012, hospital officials began conducting various forms of research to determine what could be done at the Saline facility to address the decline in patients. Research included consumer research and "several hundred" telephone surveys of Saline residents, said Vice President Rob Casalou in a previous interview.

In the fall of 2013, Casalou and others began to look closely at what needed to be done at the facility. Officials met with local primary care physicians to receive their input and had a mission discernment, which is a requirement of the faith-based organization. During the discernment, officials discussed whether the decision is being true to the organization's mission and values, he said.

The consolidation comes during a time when community hospitals are competing against low-cost alternatives for health care such as urgent care and minute clinics.
Casalou said other hospitals are facing similar challenges. However, he said he doesn't view the decrease negatively as long as the quality of care is not being compromised in the low-cost setting.
"I don't view these trends downward of the use of hospitals and ERs as a bad thing, it actually in the long run is the right thing so as long as people are getting the right care in the right place," he said.
Amy Bell contributed to this report.

This home at 106 W. Henry served as the site of the first Saline General Hospital for a short period of time from 1933 to 1935. The hospital was ran by Cora Dickson.