THE SALINE THEATRE
By Robert Lane

The first movie theater in Saline was The Liberty, owned by a man named Zimmerman. It started in the 1920s and showed silent movies. For several years, Zimmerman was successful but around the start of 1929, business began to fail and he began operating at a loss. He closed the theater May 17, 1930 and its loss was keenly felt. The location is not known but perhaps it was in the same location as the Saline Theatre described below.

The Saline Theatre was dedicated July 1, 1938 in what is now Benny's Bakery on W. Michigan Avenue. On that day the heavy canvas, which had hung over the front during remodeling, was taken down. As it fell, a chorus of ohs and ahs was heard and the new theater smiled in all the glory of its fresh paint and new entrance.

The front was Masonite painted in a deep cream or buff color with a trim of Dutch Blue. The words "Saline Theatre" in streamlined letters flowed across the front. Double swing doors on the east side led to the foyer from which one entered the theatre proper. Here was found a large center aisle with comfortable seats on either side to accommodate 270 persons. The screen was the newest sound type, as was used in large cities at that time.

The Projection Room was directly over the front entrance and of fireproof construction. In the basement were modern sanitary rest rooms. The floor had been completely and sufficiently reinforced to bear the weight of a capacity house.

Wesley M. Gilpin and Lewis M. Lash were the proprietors. Both men had long been connected with Dearborn Schools on the teaching staff. Mr. Lash was one of the originators of the system of visual education. They contracted for the best pictures which MGM, Fox and Paramount produced, which were shown here after they have appeared in the larger cities. It was the aim of the management to bring clean, wholesome entertainment to the community. They operated daily with evening shows. In addition to all the other changes a modern air-cooling system was installed. 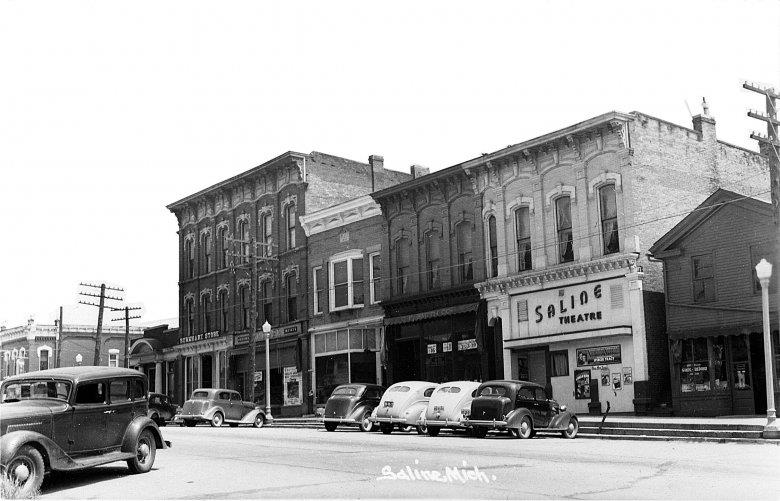 Saline Theatre
The hours and prices posted on opening day were: